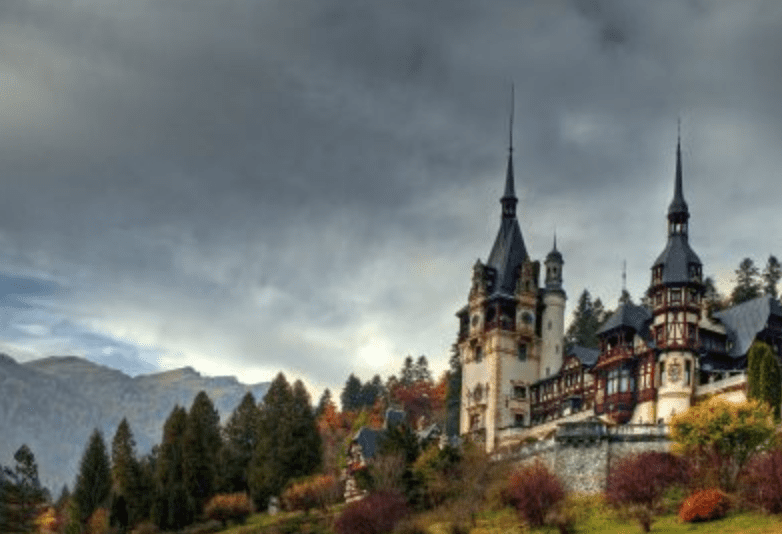 As you can see from the pictures, Peles Castle is a beautiful place and one of the most popular touristic attractions in Romania. My friends from the UKÂ were amazed by the Germanic architecture and feel of the place, when they visited.

Its style is a blend of Neo-Renaissance and Gothic Revival, build between 1873 and 1914 by King Carol I. He was born Prince Karl of Hohenzollern-Sigmaringen. Peles Castle looks very similar to Schloss Neuschwanstein in Bavaria, just on a different scale.

A Saxon influence can be observed in the interior courtyard facades, which have hand-painted murals and decorations familiar in northern European alpine architecture. The interior decorations are mostly in the Baroque style, with carved dark walnut woods and exquisite fabrics.

I wouldnâ€™t like to spoil the surprise and the beauty of the place by describing it in detail. Itâ€™s just something that needs to be experienced in person.

The monarchy brought peaceful times to Romanians, allowing us to get a personality and find our voice in architecture, art, painting and writing. It developed a stable infrastructure in cities and rural towns, improving connections and trade. I believe that it was the best thing that happened to us after the Roman invasion, but of course, it is a subjective opinion. Many Romanians would find themselves disagreeing with it. As always and then as now, the monarchy stirs quite a debate.

King Carol I visited the area of the future castle (or palace) in 1866. He fell in love with the surrounding landscape, the view of the majestic mountains covered in snow even in the summer, the sounds of the forest and theÂ murmuring of the little stream running across the back garden.

This beautiful landscape is very typical of the scenery, when travelling from Bucharest to the Central and Northern parts of Romania. Bucharest is situated in the south-east of the country, lying in the middle of a flat plain that isÂ sizzling hot in the summer, and freezing cold in the winter. Within an hour of the capital,towards the north, the landscape changes immediately: soft hills, then steep valleys, and rapid climbs into the Carpathians.

Once you cross the Carpathian mountains, the food changes, too. Itâ€™s more â€˜mountainousâ€™ with a lot of meat, potatoes and braised cabbage. Almost every farm rears pigs; cattle is more popular than in the south; mutton is quite common in stews, smoked or pan fried and served next to polenta; lamb is only eaten once a year for Easter.

I remember that close to the castle, there is a restaurant that specialises in game. Itâ€™s called the Huntersâ€™ Restaurant, and my family and I used to go there for dinner, when inÂ the area. I was always a bit frightened by the interior decorations, huge wild animals (stuffed) displayed on the walls. Itâ€™s quite impressive. On the menu, expect the regular pheasant or rabbit, medallion of venison and wild boar sausages, but also bear meat or sausages. Bear meat is quite dark and similar to lamb, like a darker lamb shoulder. However, itâ€™s not always available.

There is a lot to learn about Romania, far more than Draculaâ€™s Castle and other â€˜best selling nicheâ€™ stories. You will be amazed by its beauty, charming people and delicious food. For me, it is no wonder that tourists say it is Europeâ€™s secret gem.