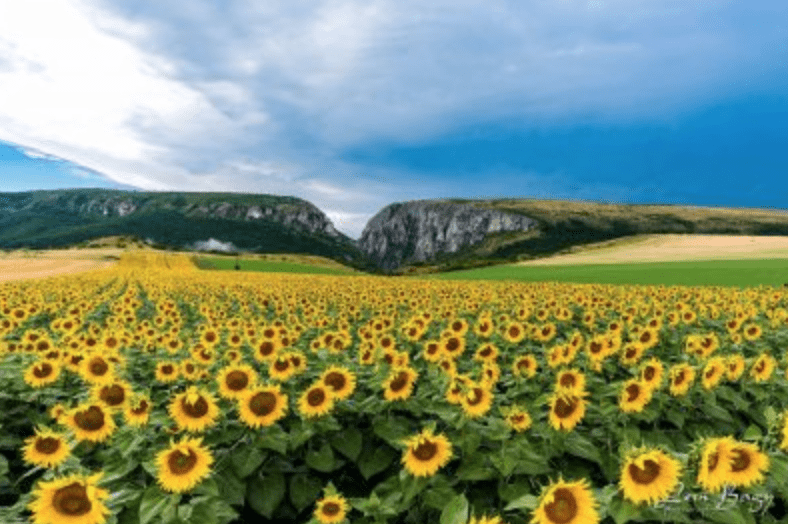 People say that Turda Gorge is for hikers and climbers, it is their heaven on earth. I would say that itâ€™s for everybody, it is peaceful, remote and spectacularâ€¦and makes a wonderful walk, too.

Turda Gorge is situated in the north-west of Romania, where we can find some of the oldest parts of the Carpathian mountains, eroded by nature and not as high as the southern or eastern peaks. The Carpathians form a reverse letter L on the Romanian territory, in the middle of which we find vast plains, soft hills, and endless forests. Turda plain is one of them. Dotted around, we can find gorges, caves, rapid streams and water falls.

The gorge is basically a huge canyon, two straight rock walls, surrounded by forests and agricultural land, which is mostly dedicated to sunflower crops.

Being 2900m long and 300m high, Turda Gorge made the perfect habitat for neolithic people who felt protected by this environment. It reminds me of the rock and cave formations in French Dordogne valley, but without theÂ cave paintings, and also looks similarÂ to Malham Gorge in the Yorkshire Dales. It’s just bigger.

It doesnâ€™t usually take a full day to visit the gorge, so while in the area you could visit the impressive Turda salt mine. Its main hall is 80 m long, 50 m wide and 40 m high. My friends told me that the Business Insider magazine placed this salt mine in the top tenÂ “coolest underground places in the worldâ€.

The villages, like many in the north-west, are picturesque, charming and a living proof of good housekeeping and prosperity. Afterall, they have been under the Austro-Hungarian Empire for quite a while, and we can see a different mentality to that in the south. There are richer areas, too. The houses have gates made of stone and brick, almost like fortified little farms.

The cuisine is as diverse as the landscape: veal, mutton, ox, pork lard, offal found in deep flavoured goulashes, paprika stews, braised cabbage in tomato sauce or white soups with dumplings. This is also the land of a sweet fresh milk cheese, similar to mozzarella, called â€˜casâ€™ and the famous plum alcoholic drink called â€˜palinca’.

Palinca or tzuica is a sort of Italian grappa, but served at the beginning of the meal, to prepare the body for the rich, intense flavours that are to come. Drinking it is almost like a prescription, everybody has to have a shot, but prepare yourself, you will feel every inch of its journey through your body.

Above all, prepare yourself for the good sense of humour of these northerners and their overwhelming hospitality.